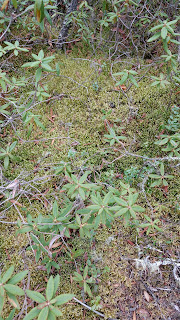 Tasked with scouting new sites for our project, we were excited to be on our own.  New bogs, here we come!  I love walking through bogs and today we planned to hit several.  The sun was shining, we had Tim Hortons in our bellies, hot tea in the thermos, and noises of Fort McMurray were soon behind us.  Armed with black and white printouts from Google Earth and a sense of adventure we set off southbound with our ‘bog-eyes’ on.

Every so often, this happens… we expand a project or find a new project and all of a sudden, we’re out driving around in the truck with our boots on ready to stop at every peatland with potential.  We get out, walk around a bit, give it the thumbs up or thumbs down, and move on.  Today we had prepared for a few sites. 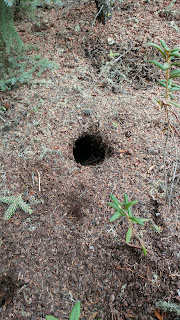 The first bog of the day was out a sandy rutty road which was precariously positioned steps from a very large lake seemingly retained by a small berm… cattails flanked the north side.  It has been dry here for quite some time, so we had no problems; the visual, however, was a bit disturbing.  The bog was also right there on the road – just how we like them.  We stopped and put on our boots with two out of three of us squishing a bit from yesterday’s soakers.  The woods were lovely dark and deep and almost immediately we stumbled upon an animal burrow – something we are unaccustomed to seeing.  The openings – 12-15 cm diameter or so – seemed just right for a mustelid of some kind.  Pretty cool stuff.  Full of puffy feathermoss and big black spruce trees, it was not the bog we were looking for, but it was very pretty and after a bit of exploration, we wished it well.  We moved on:  the piece de resistance was yet to come.

Our big goal that day was a fen-lake-bog islands combo.  We should have known it was going to be trouble.  Step one:  finding the road.  We missed it on first pass because we were informed it was a paved road.  It wasn’t.  That’s ok, we went down another road, instead, and found a whole lotta’ VERY DUSTY bogs that could have been delightful were it not for the choking dust haze squelching everyone’s happiness.  We backtracked and found the correct road.  We check in with the woman who is sitting in her truck all day flagging people down to take their numbers and tally business.  Up and down big hills, over one lane tiny bridges, we pass beautiful landscape and countless Jack Pine forests, Aspen uplands, fens, and little bogs.  We pass very few trucks, and eventually, became the only traffic.  Fifteen miles down the dirt road, we stop on the side of the road and hope against all hope that this is the spot.  We only have our odometer and our satellite imagery at this point, foolishly leaving our gps at home.  There is no cellular service here.  We are in the middle of nowhere.  We can only assume we’ll come on it eventually if we walk south from here.

So, we start in.  Brambles.  Lots and lots of prickly brambles.  I’ve never been so mad at wild roses in my life.  They were mixed in with drooping, criss-crossing, akimbo, skinny, branchy, shrubby crap that morphed into full-fledged willow mess at decreasing elevation.  We were scratched, irritated, and realized we should have brought lunch on this adventure.  With willows came wet.  Sloggy mess morphed into treed sloppy mess with holes ready to take a boot.  Avoid trees, avoid willows, avoid holes, slap at bugs, overheat, repeat.  Finally some boggy parts – hummocks, thank God!  But still willows and still larch now and still sloggy holes and not at all what one might want for a scientific research site that must be accessed 5 times a year.  By now, we were demoralized and quite frankly were growing stupid (save your jokes).  We had done way too much fen tromping, willow avoiding, and bramble broaching and now were too tired to truly explore the innards of the Bog island, but from our vantage, we saw big ole’ larch overhead much farther in (in bog parlance, again…. No bueno).  We headed back hoping to find a better route. 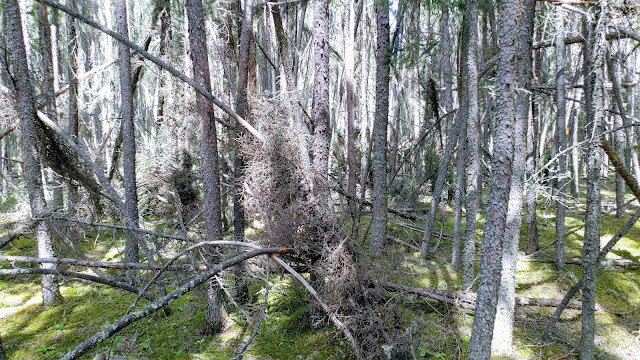 We found cutlines in the fen, so knew where we were and tried a more bee-lined approach to the road.  It took us, eventually, to a beautiful – and I mean BEAUTIFUL – forest of spruce so dense, it shaded out the world.  There were no vasculars in the understory, but Pleurozium moss carpeted the floor.  Everything was covered with it.  We had found what appeared to be a two species forest.  I’m sure there were more species there, but you get the idea.  It was dark and calm and beautiful and amazing.  We sighed a sigh, calmed our brains, and gathered our strength for tackling the brambles to come.  At the edge, Ledum of unusual size appeared, and willows began anew.   We had definitely found a much better way to scale the upland.  Everything seemed better on the way out.  Shockingly, we popped out AT OUR TRUCK.  Amazing.  We filled our water bottles, breathed the air, ate apples, and made peanut butter and jelly sandwiches on the tailgate.  Deer crossed the road, we recovered, and looked at each other with relief. 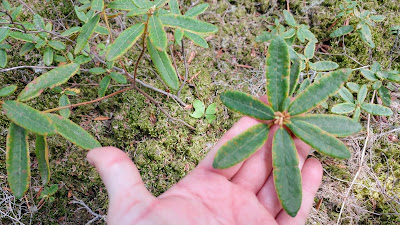 We had an adventure filled memory-making day.   I'm sure there are many to come.  Happy return to field season, everyone!