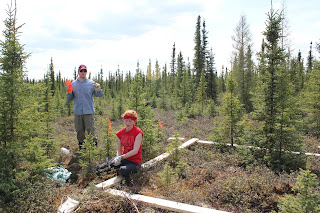 It was the third full-out field day today.  Bruised and sore, we are kicking some serious plot-building butt.  I am so proud of this team we have.  They are without complaint even when I know they are exhausted and are pushing themselves places they usually would never go.  In this group, we have three undergraduates with us for their first year of bog fieldwork;  Mikah, Anita, and Brian have been incredible and it will be a great year with them on the team. 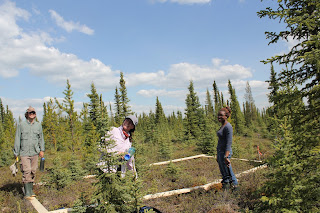 We have hauled 510 10’ pieces of lumber from here to Red Earth Creek.   We haven’t quite finished with 170 of those that need new homes tomorrow after finding their angle of repose tucked into the trees about 200 meters down the cutline.  That is almost a mile of 10-foot pieces laid end to end.  This lumber is now distributed across a few sites, and we’ve another 170 to go at a new site early next week.  Slogging through the soupy mosses, while an excellent workout, is not the easiest thing in the world.  I give our team giant props for being such good sports.  Everyone has bruises on their shoulders and sore muscles everywhere, but a few more days of this and we can get onto the fun less painful stuff. 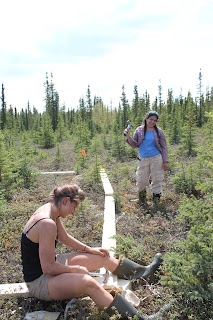 Postings may be scarce here while we exhaust ourselves, but all is well in the grand scheme of things.  Fires are burning here and there, but nothing to cause us worry.   Hopefully will keep you all updated as we move through this first phase of the summer.

Kim
Posted by Kim Scott at 8:04 PM No comments:

As I sit on my bed in my New Jersey home, procrastinating on my last bit of packing for this year's Alberta trip, I thought it would be appropriate to reflect on my past Canadian summer adventures. As a recent Villanova graduate (very recent - I just graduated yesterday!), I hadn't anticipated making a return to Alberta this summer. But as luck would have it, I don't have to start my graduate program until September, and I happily took the opportunity to spend my fourth summer in the beautiful boreal zone. 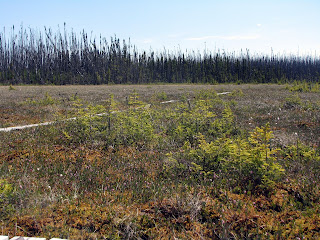 The first time I came up to Alberta, I had no idea what I was in for; I barely knew what a peatland was. My experience learning about these remarkable ecosystems, working in them, and ultimately being able to form my own scientific questions about them, has been incredibly formative. I am a lifelong outdoors enthusiast, but until my first field summer, I didn't know that I could combine my love of adventures in the wilderness with my passion for science. At the end of this summer, I will be starting a Ph.D. program in biogeochemistry at UC Davis; considering that I didn't even know what biogeochemistry was before working in our lab, you could say that these experiences have been pretty life-changing for me! 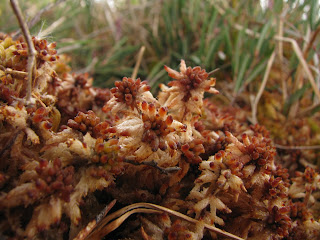 My particular research focus for the past few years has been nitrogen fixation in boreal peatlands - a pretty cool process by which microbes can turn nitrogen in the atmosphere (N2) into usable nitrogen for plants, and the main source of usable nitrogen in our peatlands. I'm interested in figuring out what controls the rates of this process in our ecosystems, and spent a lot of time this past year studying the role of molybdenum (Mo) and phosphorus (P) availability. I'm really excited to hopefully be able to keep collecting data on that project, as well as measuring rates of fixation at many other sites to determine the effects of nitrogen deposition (a major concern due to the proximity of the Athabasca Oil Sands Region) and time-since-wildfire. If last summer taught me anything, it's that science is as frustrating as often as it is fun, but I am stoked to start things up all the same.

-Katy
Posted by Unknown at 6:02 PM No comments: 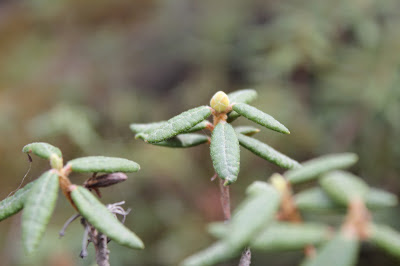 If I didn’t know it was only May 19th, I would say it is at least mid-June here in Alberta.  A small contingent of our group arrived at Meanook early this year, and we are just driving back from Fort McMurray as I type.  It has been in the upper 70’s near 80 for days, and we were just caught in a very summer-like downpour that came out of nowhere.  The rain felt good.  Sadly, with the heat comes mosquitoes…  the big bomber-type are out and ready to bite through pants and protective long-sleeved shirts.  I clapped one dead, opened up my hands, and it flew away unperturbed and chomp-ready for its next victim… these things are beasts.  Already, myself, Nate, and Cara itch from the buggers, and I fear we are in for it early with the bugs.  Usually, we can count on at least a couple of weeks before the nets come out, so we shall see.  I’m sure it will be a rude welcome on Tuesday for the new members of our team when they show up. 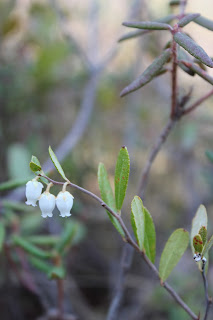 Meanook is ready for them.  Rooms are prepped, and April, the new cook for the summer, has our dietary restrictions noted, and is ready for the considerable challenge.  This will undoubtedly be Meanook’s last year and I’m sure there will be more about that peppered throughout the summer, but for now, it remains a home away from home for me and for a contingent who has been coming here for several  years.  It is at least my 11th or 12th summer - I've sort of lost track.  It has been an establishment for our research group since before I can remember and we have accumulated just as much equipment as one would think after so long a time.  It is a nice place to hang your hat and with the Victoria Day holiday here in Canada, it is quiet, but that will change with a blink of an eye with the imminent arrival of several crews. 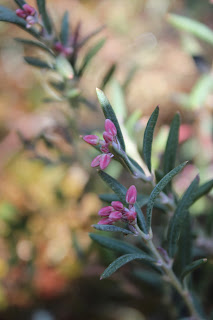 My last post included much about the birds and so I’ll just finish up on this long day by saying that we saw Northern Shrikes (yes, Shrikes, Kel!!) at EVERY site we visited on this quick trip north.  It was good to see them eyeing us and chatting to their partners.  White throated sparrows sparred with Chippings in feeding flocks rounded out with boreal chickadees and fat robins.  Magpies bobbed from ground to fence and back and ravens are everywhere.  We’ve seen several deer, a coyote, and have been serenaded by the comb-click of boreal chorus frogs.  Thankfully, it is nearly summer for more than just the mosquitoes.

Safe Travels, crew!  We will see you soon.
Posted by Kim Scott at 7:44 PM No comments: