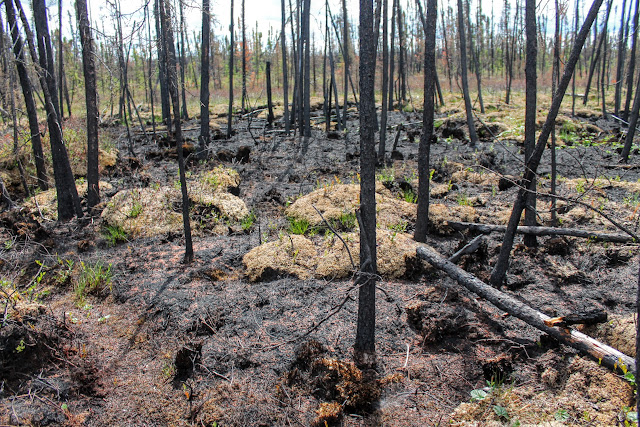 Black Spruce cones form in clumps high up on branches near the tops of trees.  They are considered serotinous. That is to say, these specialized trees depend on fire to help release their seeds to the world.  The trees bear slowly-opening cones for 25 - 75 - 100 years until a fire sweeps through to rapidly open the cones to disperse their seeds to the charred peat.   They have evolved to survive in a world in which fire is expected – and up here, that return interval is estimated at just over 120 years.   You would be hard pressed to find spruce trees older here in the bogs of Alberta, and we can tell you where a few are, but they are rare rare rare.  We also think that the fire return interval is likely shrinking.  Fires are predicted to increase in intensity and to happen more often. This is all part of the climate story of the world. 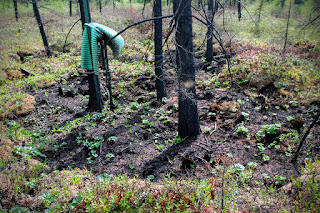 The Fort Mac fire has recently been categorized as being held, and it has surely released a multitude of black spruce seeds – many in our study sites.  It has also burned a bit of our equipment and more importantly, some beautiful landscape is now black and crunchy. The town itself seems to be recovering as well.  They don’t let you into the residential areas that were nearly completely demolished, but the town seems to be chugging along with most things back open. 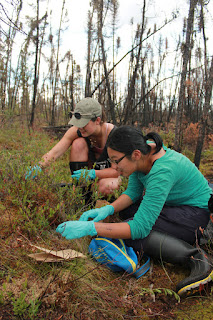 I just spent a few days there with Caitlyn and Wendy and we rolled along the truck-filled roads with our aim on science. We breathed in bad smelling air and watched stacks billow brown tinged ‘steam’.  The big business of oil sands was back up and running.

At Anzac, the first site we visited, the constant buzz of bugs was punctuated by helicopters carrying water bucket after water bucket to nearby hotspots.  Bright green Cloud Berry leaves and Labrador Tea plants were starkly tender on the charred peat; and a month post fire,  where I stood, life was returning.

Along with Anzac, McMurray Bog was also partially burned with the Black Spruce taking the brunt of the damage at both sites. Another site, Mildred, was a total burn.  Two other sites were left unscathed and wait for the next fire to open their cones.  The science moves on.

These bogs are resilient and I am glad to see that life springs anew sometimes even because of great tragedy.  We will return again in a few weeks and I'm sure we will find new and green freshness springing from darkness. 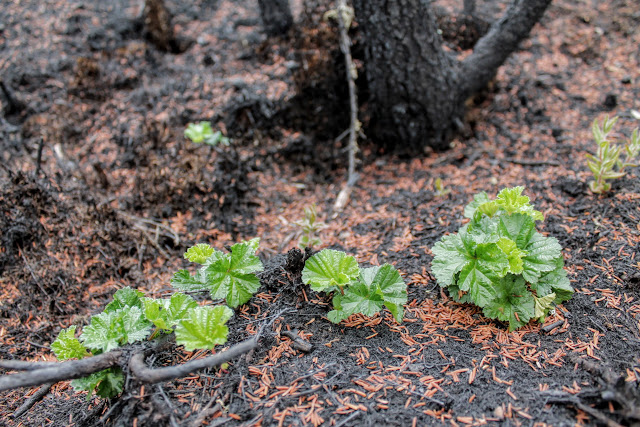