Taking a new perspective on the lovely bogs of Northern Alberta, I am a Villanova undergrad helping out with the project this summer.  Eric and I were wide eyed and eager for our trip up North, ready to get our hands and our boots a little dirty.  After cleaning, organizing, and analyzing in the lab we were very excited to see the real thing.

After a couple easy flights we landed in Edmonton and headed up to Athabasca.  Excited by the saltwater pool at the hotel, we had a fun night before the real work began.  Then, the next day we headed to Athabasca University, prepping for all our sites: constructing the sippers, cutting boardwalk pieces, and getting all the materials we needed.  Then, after a long day at the garage, we got a good night of sleep and headed up to Fort Mac.  On the way, a site near Conklin was scouted, but to no avail.  We did get to see our first bear of the trip (kind of accidentally) as we were turning around to plan what to do next.  It ended up being a day off due to the new site not being what we were looking for (sigh).  So, the true fieldwork had to wait one more day.  We got up to Fort Mac, a little confused at how such a bustling town can be this far North, but actually really liked the town's unique charm.


So, Friday comes and we head to MacKay to tackle the first site.  With Kel's and Kim's crash course in everything bog related, we were ready for veg collection.  We quickly learned the difference in root color of Fuscum and Capillifolium, had to scrape off Ledum from our gloves (the new growth is pretty sticky in early June), and tried not to get too stuck in one of the wetter bogs we went to over the week.  While it took some practice and quite a few questions, Eric and I quickly became pros at spotting all 10 species we were gathering.  With the help of SIU, Caitlyn, Yev, Kristen, Kim. and Kel, we cruised through veg and water collections at MacKay and then went to JPH4 where we got that finished pretty quickly as well.  I had never been in a bog before so I got quite a few pictures after I figured out my best path so that I wouldn't get stuck.

The next day was our first new site day.  We arrived at the site which we named Kearl and loaded up as much as we could to take out closer to the site.  As Kim mentioned, we had already seen a bear on the way and it was pretty clear that this is one of the more "off the beaten path" sites.  It was a hot and steamy day so we got to work right away to hopefully finish a bit early.  We hammered a lot of nails, pounded in posts, and set up everything pretty quickly on the site.  Then, with the help of SIU we struggled through getting veg for the sites (a couple of the samples were hard to find at some of the plots) and started packing up to get back to Fort Mac.  That's when Jeremy called us about the bear.  With this being the first wild bear I had seen while I am not in a car, you would think I would be cautious and careful, but no, I pulled out my phone to get a good video of the bear instead.  After a bit I realized, wow that was dumb, and pulled out my bear spray instead.  But, the bear sauntered on by and left us alone.

The last three sites, McMurray Bog, Anzac, and Horse Creek, all went without too many problems and the rest of the week was pretty smooth sailing.  McMurray Bog was pretty dry on the walk out there and no one went for an unintended swim, the rain wasn't too strong at Anzac, and the Horse Creek setup went quickly now that we were pros at setting up a site.
I was honestly a bit sad to leave Fort Mac, but was excited by the thought of our nice hotel beds waiting for us back in Athabasca.  We then made quick work of wrapping things up and headed back to Philly and the lab.  Overall, I know both Eric and I learned a lot being out in the field as well as had a good time with it.  Other than a few less horseflies, no complaints from me.  I can't wait to get back up there next month!!

A new fan of peatland bogs,

Spencer
Posted by Spencer at 9:36 AM No comments:

The Bears Will Wait

There are fieldwork days and there are fieldwork days.  Site set-up days are the latter. Full of hauling, and hammering, and organization, all told, our set-ups this trip went pretty smoothly.  At our first, there were 12 of us eager and ready.  I pulled out my flagging tape and forged the path pre-delimited.  We trooped in with raw lumber, t-posts, weather station, electric fence supplies, nails, hammers, chainsaw, sample bags, spectral analysis equipment, water wells, augers, post-pounders, sphagnometers, resin tubes, hose clamps, funnels, nut-drivers, loppers.  Within 30 minutes everyone was smoothly onto jobs most have probably never done before.  It was to hit 31 C this day according to the newly deployed weather station and the horseflies provoked. 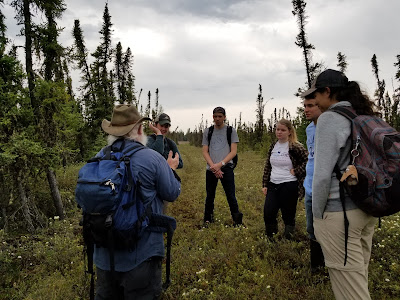 Our crew is great.  Our VU contingent is 7 strong – including two new undergrads who are experiencing the wilds up here for the first time.  Spencer and Eric are great additions to our team – they are already comfortable ID-ing Ledum, know leaves on bog rosemary are opposite and not alternate, and can tell Evernia from Usnea.  Power tools, hammers, chainsaws, big trucks – no problems.   I’m proud of everyone.  It has not always gone to plan on this trip, but it never does, and rolling with it and improvising have been and continue to be strengths for us all– qualities all field ecologists need in spades.  Joining our VU crew, the SIU team set up with us, and it was just right.  They are family.

But I digress….   the set up.  I heard a ring.  Jeremy was calling.  The SIU crew had just finished up and had headed to their diesel.  I had one more thing to do in the bog and the VU crew would be right behind them.  Jeremy is calm: “There is a bear in the cutline just hanging out – I don’t mean to be alarmist, but you should know.”  I decided the last thing on my agenda could wait.  I walked out of the bog with Caitlyn to where the crew waited and to where the bear decided to explore.  Eric was yelling at the bear and waving his arms.  Our group tried to look large.  The bear seemed nonplussed.  I hit the airhorn.  The bear just looked at us. Again, with the airhorn - to the point, where it became obvious to me that airhorns are good for notifying your friends that you might be in trouble, but might not be the best at motivating a bear to curb its enthusiasm.  Good to know.  Kel had his bear spray at the ready.  Ten meters away, the bear stared, curious, and ambled, slowly, into the bog.

That was the second bear of the day for us – the first was a beautiful Cinnamon roused from its grazing near the road.  I personally saw 5 bears this trip – all but the curious one, from the safety of our F-150.  It could be an interesting year. 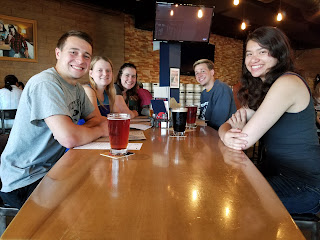 It is now 6 C and raining and we are driving back to Athabasca.  Thoughts of snow-tube extraction from Crow Lake niggled at us this past 24 hours or so, but today is not the day.  We have until October and hopefully conditions will be better next trip - or the next - I’m not complaining.  My joints are tired.  I think we are all ready to head home and take a day or two to realign our alternate realities back home;  I know I am.   For now, the bears, bugs, and bogs will have to wait.  The beers, however, will not.  Cheers from Alberta!