Once upon a summer, it rained. A lot. For two weeks straight. A bit of rain doesn't prevent most people from going to work, but when your work site involves accessing dirt (or mud) roads that rarely receive maintenance, a little bit of rain can quickly turn into a big problem.

Soon, checking the weather for a possible end to the downpour became our main hobby. On the first day of predicted sunshine, our small team decided that we couldn't wait any longer. Dubbing ourselves the "Ambassadors to Utikuma," Hope, Jacqueline, and I made arrangements to start our nitrogen-fixation studies at our two most difficult-to-access sites, Utikuma and Red Earth Creek.

Things were off to a bad start when we quickly realized that one morning of sunshine may not have been enough to reverse the damage caused by two weeks of rain. Within five minutes of driving the dirt road to our Utikuma site, our truck slid off the road and into a muddy ditch. With shovels, plywood, and several two-by-fours, we eventually dug ourselves out, and made the perhaps-not-so-wise decision to keep on driving.The rest of the drive was uncomfortably quishy and slippery, but in the end, we made it!

Our next road proved to be even more of an obstacle. At first glance, the road to our Red Earth Creek site looked smooth and unharmed by the downpour. We happily began our trek, not anticipating any problems. After a few minutes, we started to wonder: if the road looks so good, why do our tires feel so weird? Is there something wrong with our truck? We hopped out of Sparky and immediately sank into about six inches of mud. Looking back at the way we had came, we realized that the only reason the road was so smooth was because nobody had driven on it. Our tracks had formed deep, deep ruts. But once again, we decided that we might as well keep going. That is, until we reached the Pools of Despair.

In dry conditions, there are several deep holes in the road that cause the truck to bounce in a manner that is probably unsafe for both truck and passengers. In wet conditions, we learned, those deep holes fill up with water. Water that is higher than the undercarriage of the truck. We cautiously drove up to the holes, wondering if we should just gun it through and hope for the best. After getting out of the truck and walking through the knee-high pools of water, we decided against it. 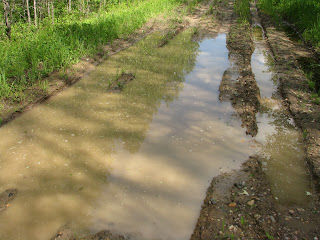 A rational group of people would have turned around and gone home. Instead, we grabbed some plastic boxes out of the truck and attempted to bail out the road. Needless to say, this was not an effective strategy.
Not so easily defeated, we returned to the Pools of Despair a few days later with an even more surefire scheme - we cut up an old garden hose and decided to siphon the water off the road. We did not succeed in draining the pools, but Hope became intimately acquainted with the taste of muddy water.

At this point, we gave in to our only remaining option: walk down the road with all of our equipment. We had been postponing this strategy for a while because we had absolutely no idea how much of a distance stood between the pools and our site. The only directions we had were scrawled in Hope's field notebook and were somewhat vague: "straight past tires...long time" We had made it past the pile of tires on the side of the road, but had no idea just how long "long time" was. Luckily, it turned out to be only about two miles between the pools and our site - not too bad of a walk! 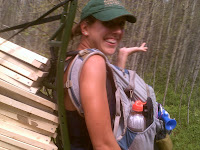 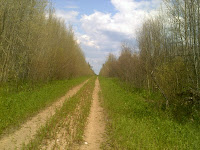 We also decided to engage in some casual amateur road engineering. Armed with a few shovels, we attempted to redistribute the mud built up around the pools in hopes that when the water eventually dried up we'd have a more even surface to drive on. We were both unequipped and unqualified for this task, but boy did we shovel some mud anyway.

When we returned the next morning to take some more samples, we were greeted with the sight of tire tracks going off the road...and around the death pools. After all of our efforts, it appeared that what we thought was impossible (driving halfway off the road through a muddy ditch and into some trees) was, in fact, a totally viable way to get past the Pools of Despair. All of our crazy schemes were apparently as unnecessary as they were ineffective. We couldn't help but laugh.

In the end, we learned a valuable science lesson: sometimes you just have to gun it and try. (But don't close your eyes while you drive.)

Coming soon: a photo journal of a typical day in our lives!