The troops are flying back to Canada today for the last trip of the season – they are actually on the plane as I type, after (not surprisingly) a bit of a delay at PHL.  October trips are usually my favorites, but this year, I am holding down the fort.  For me, bending over for long periods of time and carrying heavy equipment through squishy sodden -- yet beautiful -- peat is frowned upon by the powers that be right now.  Sigh.  I’ll miss the bright yellows and oranges of the aspen, larch, and birch swimming in the deep blue of the Alberta skies and I’ll especially miss the camaraderie of good friends doing fieldwork.  I’ll miss the berries and the foraging bears and the wild eagles.  The weather for this trip looks fantastic.  I am sure they will have a great time.

I will also miss, perhaps, my last chance to say goodbye to Meanook.  Our September trip was a busy one, filled with both field work and dismantling nearly 15 years of equipment and memories from a place we've called home for a very long time.  The Meanook Biological Research Station is closing.  We accomplished our field work in September; and then, systematically moved our equipment and tools out of Meanook.  Under the heavy weight of recent budget cuts, the University of Alberta has decided to step away from the field station, with the Department of Biological Sciences breaking ties with us and other external researchers associated with the station.  It has not been a smooth extraction, to say the least.

Steven Harper, the Prime Minister of Canada since 2006, and the government of Alberta, are no friends to education, arts, the environment, or scientific inquiry.  With a power base in Alberta, Harper is changing the landscape in Canada in ways both metaphorical and literal.  Massive budget cuts have been imposed on countless institutions and researchers on a national level, and scientists have not only been defunded and disbanded, but they have also been actively muzzled.  Alberta, as a lightning rod for this new Conservative party mentality, now functions, along with the whole of Canada, with a bleaker, heavily petroleum based-economy.  Harper and his party actively shunt money now to industry, establish increased subsidies and reduced regulations to oil companies and their ilk, while systematically cutting funding for, and eliminating, jobs and resources to scientists and educators.   Scientists can no longer do their jobs (even if they have them), and continue to be limited in their ability to disseminate real data and information. Meanook, an outpost for scientists near the oil sands region, is closing.  It is not the first research station in Canada to fall under this new reality (far from it), but it is near and dear to us all; and as we struggle to reestablish a new paradigm for our own research needs, we hope we can help keep Meanook functioning in any way we can.  For now, our hands are tied.

While we were able to continue our research based out of Meanook this past summer, it will be our last unless something is done and done quickly.  I have spent large chunks, if not all, of my summers at this research station since 2002, and much of our team comes back year after year.  We’ve seen managers and cooks come and go, but through it all, Meanook is home, and a place to not only do science, but it is where we meet up with old friends who have turned into family.  The closing of the Meanook Biological Research Station is not only another jab at making scientific discoveries more difficult in the shadow of the oil sands region, but on a personal note, as researchers and human beings, it breaks our hearts.

We have hope that another entity will pick up the baton and carry it forward, but for now, we are struggling through upheaval and chaos.

If you have some time, please read about what is happening to our northern Canadian colleagues.  For our research team, the effects are palpable, and for the Earth, it is a disaster buried in the smog.

A FAR from exhaustive list of links that may be of interest:
http://insideclimatenews.org/news/20121114/climate-change-scientists-global-warming-stephen-harper-canada-skeptics-oil-sands-budget-cuts-muzzling-protests

http://scienceblogs.com/confessions/2013/05/20/the-canadian-war-on-science-a-long-unexaggerated-devastating-chronological-indictment/
Posted by Kim Scott at 8:14 AM No comments:

Back in late July, we conducted a synoptic survey of bog sites near the Ft. McMurray oil sands region. How does one do such a thing? With HELICOPTERS! Really. We hired a helicopter for the day and were flown from site to site so we could rapidly collect vegetation samples from a total of twenty sites over the course of two days. Not too shabby.

The survey also granted us the incredible opportunity to see the oil sands region from the sky; both the beauty of Alberta's natural peatlands and the widespread destruction of oil sands mining became apparent from our vantage point.

A selection of some of the intact (and gorgeous) natural areas we spotted from above: 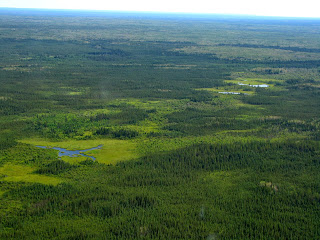 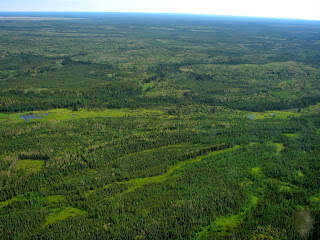 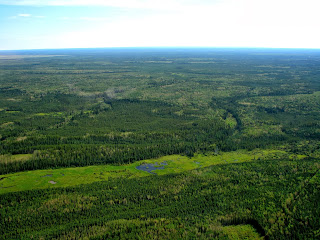 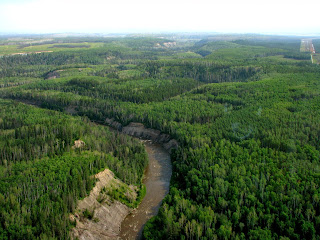 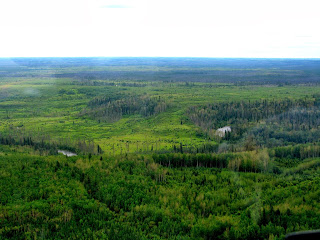 And the devastation of the oil sands operation... 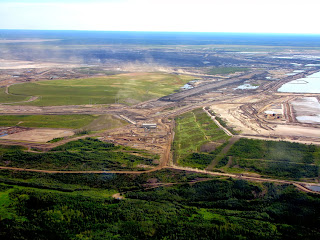 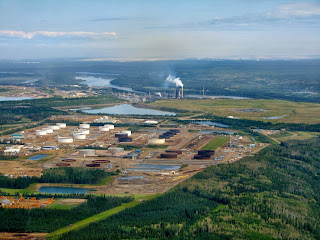 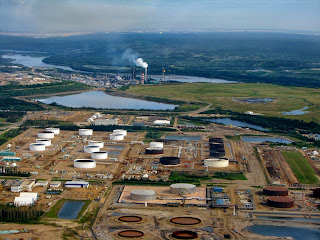 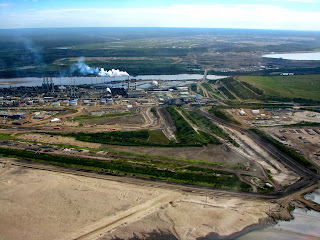 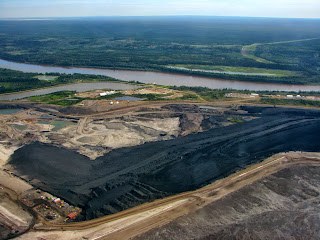 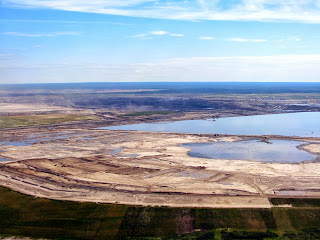 It is hard for me to not feel upset and disturbed by the whole mining operation after seeing it up so close. Oil is energy, but at what cost? Oil from tar sands mining is the most energy-intensive to extract, and requires the destruction of some of the world's most valuable ecosystems. No thanks.

~Katy
Posted by Unknown at 9:57 PM No comments: